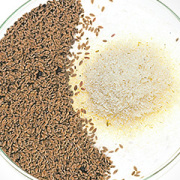 Based on information collected in the field, we believe that this year’s Psyllium crop is going to be 25-30% less than that of last year. State-wise crop figures are given below.

Given in the table below is a snapshot of the crop arrivals from the last few years and the estimated arrivals for 2016.

As is apparent from the above figures, apparent/expected demand is significantly greater than upcoming supply. And so although there has not been any significant pick-up in overseas demand yet, Psyllium Husk producers, stockists, etc., have been active buyers in the market and as a result Psyllium seed prices have moved up by around $225/MT in the first 10 days of this month.

Guar Gum – all the bad news seems to be priced in!